Sometimes I don't know which is thicker, your skull or your accent. - Anita

Anita is an important side character West Side Story. Her character is based on Juliet's nurse from Shakespeare's Romeo and Juliet.

Anita is a Puerto Rican immigrant who came to America shortly after her boyfriend, Sharks leader Bernardo, and works as a seamstress in New York. She lives in the south side of town in the same apartment complex as Bernardo and his younger sister, the idealistic Maria. Anita is a hard-working woman who understands the hardships she's been dealt. She serves as a confidante to Maria, as she is the only person who knows of Maria's secret love affair with Jets member, Tony.

Anita is a sassy and sarcastic woman who always speaks her mind. Her relationship with Maria is a big sister/little sister dynamic. Anita is incredibly protective of Maria. She is also very sympathetic of her situation with Tony, promising not to tell Bernardo. But this quickly changes as Maria still sides with Tony after the rumble. Bernardo and Anita’s relationship is a best friend/lover dynamic, not only are they lovers they are also best friends. They are very protective and loving towards each other but get at each other's throats especially over living in America.

After the rumble, during which Bernardo is killed by Tony, Anita is in mourning and warns Maria to leave Tony and find someone else, preferably someone of her own race, but when Maria reminds Anita of her love for Bernardo and points out that when you're in love, right and wrong don't matter, Anita begins to understand Maria's situation. When Lieutenant Schrank arrives to question Maria about the flare-up at the dance, Maria sends Anita to Doc's to give Tony a message that she will be a little late in meeting him there. When Anita arrives at Doc's, the other Jets, minus Ice, begin harassing her and come very close to raping her until Doc arrives and stops them. In anger, Anita states that Bernardo was right in hating them and, instead of relaying Maria's message, tells them to tell Tony that Chino shot and killed Maria when he found out about them; in so doing, Anita's action sets the final act of the tragedy into motion.

Maria works in a bridal shop with Anita, the girlfriend of her brother, Bernardo. Maria has just arrived from Puerto Rico for her arranged marriage to Chino, a friend of Bernardo's. Maria confesses to Anita that she is not in love with Chino. Anita makes Maria a dress to wear to the neighborhood dance. After the dance, Anita, Rosalia, and the other Shark girls discuss the differences between the territory of Puerto Rico and the mainland United States of America, with Anita defending America, and Rosalia yearning for Puerto Rico. Anita later tells Maria of the impending brawl between the Sharks and the Jets tomorrow night.

The brawl results in the death of Bernardo, Anita's beloved. A grieving Anita arrives at Maria's apartment. As Tony leaves, he tells Maria to meet him at Doc's so they can run away to the country. In spite of her attempts to conceal it, Anita sees that Tony has been with Maria, and launches an angry tirade against him. Maria counters by telling Anita how powerful love is, and Anita realizes that Maria loves Tony as much as she had loved Bernardo. She admits that Chino has a gun and is looking for Tony. Lt. Schrank arrives to question Maria about her brother's death, and Anita agrees to go to Doc's to tell Tony to wait. Unfortunately, the Jets, who have found Tony, have congregated at Doc's, and they taunt Anita with racist slurs and eventually simulate rape. Doc arrives and stops them. Anita is furious, and in anger spitefully delivers the wrong message, telling the Jets that Chino has shot Maria dead.

“If one of you was lying in the street bleeding, I'd walk by and spit on you.” - Anita to the Jets 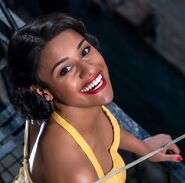