"When do you kids stop? You make this world lousy!" - Doc to the Jets

Doc is an important side character in West Side Story, he is one of only four adults featured prominently in the story (the other three being Lieutenant Schrank, Sergeant Krupke and Glad Hand).  The character is based on Friar Laurence from Shakespeare's Romeo & Juliet; Friar Laurence was Romeo's confidant and spiritual advisor, and also a skilled apothecary.

Valentina is his female counterpart in the 2021 movie.

A gentle and soft-spoken elderly man, Doc does not understand the younger generation, much less why they choose to resort to violent measures to achieve their ends. As such, he attempts to dole out whimsical advice to the Jets, but his suggestions often fall on deaf ears.

He is the proprietor of Doc's Drug Store, a small run-down storefront pharmacy and candy store which, like other drug stores of the day, also had a soda fountain complete with bar and stools, and even a small game room with a dartboard and pinball machine. Doc's is the main hangout for the Jets and is used as the meeting place between the Jets and the Sharks for their "war council", a conference between the two gangs to determine logistics for their upcoming rumble.

After Tony opted out of the Jets, Doc had hired him to work in the drug store stocking shelves, running errands and keeping the place clean. As such, Doc, who had no known family, came to look on Tony almost as a son and was therefore willing to do anything to help him.

Through no fault of his own, it falls to Doc to inform Tony of what he is told by Anita, which sets the final act of the tragedy into motion: when Anita comes to the drug store intending to tell Tony that Maria will be a little late to meet him, she is relentlessly harassed by the other Jets until Doc stops them. Angered, Anita lies and tells them all that Chino had shot and killed Maria when he found out about her and Tony. Doc throws the Jets out and then relays Anita's "message" to Tony, along with what was meant to be "getaway money" for Tony and Maria to get out of the city.

Upon hearing the message, Tony bursts out into the streets and screams for Chino to come and kill him as well. When he sees Maria approaching he runs to her, but when Chino appears and shoots Tony, Doc is the first adult on the scene, but all he can do is sadly watch from a distance as Tony dies in Maria's arms.

"I have no mind. I am the village idiot.” - Doc to Lieutenant Schrank

"Fighting over a little piece of street is so important?" - Doc to the Jets

"Why do you kids live like there's a war on?" Doc to the Jets 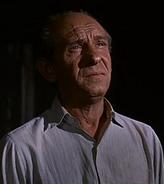