“Loving is enough.” - Maria to Tony

Maria is the lead female character in West Side Story. Her character is based on Juliet in Shakespeare's Romeo & Juliet, who falls in love with Romeo (Tony).

Maria is a Puerto Rican migrant. She was raised Roman Catholic and continues to pray regularly.  Maria is the younger sister of Bernardo, who came to America shortly before her to try and make a better life for himself and their family.  After she arrived in New York, Bernardo designated himself to be her protector and, to Maria's annoyance, often lords his status as older brother over her.  It was arranged for Chino, Bernardo's friend and fellow Shark member, to marry Maria, but Maria shows no interest in him.

As a new immigrant to the States, Maria is naive about American customs and lifestyles, and she is eager to take in the ambience at the upcoming dance, but Bernardo is determined to protect her, and charges Chino and Anita, Bernardo's girlfriend and Maria's closest friend and confidante, to keep an eye on her when he cannot.

At the dance, Maria is introduced to some of Bernardo's other friends, but as they all begin dancing Maria spots Tony at the other end of the dance floor.  They walk up to one another and gaze into each other's eyes.  Tony thinks it's all a joke, but Maria replies that she has not yet learned to joke that way, and adds she probably never will.  The two begin dancing themselves, and as they kiss, Bernardo angrily breaks them up and warns Tony to stay away from her; despite Tony's protesting, Bernardo orders Chino to take Maria home.  Later that night, Tony finds Maria on the fire escape outside her apartment and the two solidify their love for one another. After the war council at Doc's, Tony again meets up with Maria, this time at the Bridal Shop where Anita becomes aware of their secret relationship; Maria begs Anita not to tell anyone else, especially Bernardo, and Anita reluctantly agrees. Maria then persuades Tony to stop the rumble, to which he gives his word, but at the rumble, when Riff is stabbed to death by Bernardo, Tony takes Riff's switchblade and kills Bernardo in revenge.

Chino is the first to reach Maria after the rumble, but when she asks him if Tony is okay, Chino angrily answers only that he killed Bernardo, but Maria refuses to believe it until Tony arrives in her room; seeing the look on his face, Maria runs up to him and beats on his chest screaming "Killer!  Killer!" until she dissolves into Tony's arms sobbing.  He explains that he tried hard to stop the rumble, but after Riff was killed everything else happened too fast.  Tony asks Maria for her forgiveness before he turns himself into the police, but Maria begs him to stay and Tony agrees, saying that they're really together now, but when Maria points out that everything and everyone around them is trying to keep them apart, Tony suggests they can get out of town.

The two fall asleep on her bed, but when Anita returns home and knocks on Maria's door, Tony decides to go to Doc for some getaway money so they can leave the city.  Maria promises she will follow Tony to Doc's, and he makes his way out the window right before Maria lets Anita in, but Anita rushes to the window in time to see Tony running down the alley. Citing that Tony killed her brother, Anita warns Maria to dump him and find someone else, preferably someone of her own race, but Maria refuses to listen; she reminds Anita of her own love for Bernardo and makes her realize that when you have love, right or wrong don't matter.

The two exchange stories about Chino and Tony, but before Maria can leave to meet Tony at Doc's, Lieutenant Schrank arrives to question her about the flare-up at the dance, so Maria fakes a headache and, using double talk, sends Anita to Doc's to inform Tony that she will be a little late. After Anita leaves, Schrank asks her about what happened at the dance, but Maria lies to protect Tony and tells Schrank that the flare-up was over another boy from Puerto Rico named Jose.

Unbeknownst to Maria, when Anita arrives at Doc's with Maria's message she is harassed and almost raped by the Jets, at which point Anita angrily tells them instead that Chino shot and killed Maria when he found out about her and Tony; when Doc gives Tony Anita's "message" he bursts out into the streets screaming for Chino to come and kill him, too).  Maria finally arrives at the playground, and Tony runs to her in delight, but right before they reach each other's arms, Chino emerges from the shadows and shoots Tony.

All of the Jets and Sharks arrive at the playground as Tony dies in Maria's arms.  The two gangs are about to fight yet again, but Maria angrily stops them.  Taking Chino's gun, Maria blames all of them for killing Riff, Bernardo and Tony, not so much with guns, but with their hatred.  Claiming that she now has hate, she is ready to kill and aims Chino's gun at Ice, but cannot bring herself to pull the trigger; she drops the gun and falls to her knees in tears.

"My brother is a silly watchdog!" - Maria to Bernardo

"ALL of you! You ALL killed [Tony], and my brother, and Riff... not with bullets and guns, but with HATE! Well, I can kill, too, because now I have hate!" - Maria to the gangs, after Tony's death 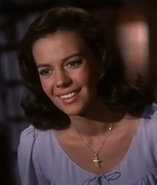 Rachel Zegler as Maria and Kyle Coffman as Ice (2021)
Community content is available under CC-BY-SA unless otherwise noted.
Advertisement