Alive
Mouthpiece is a member of the Jets in West Side Story.

Harvey Honiclers was born on August 19, 1941. He was born into a Polish-Jewish family and moved to America in 1945. His family moved away from the holocaust and didn’t expect the anti-semitism they’ve experienced. When he was 8 years old , his dad died to a Jewish gang called the Hawks who forced him to join. When he was 10, he met a very tall and beefy boy at a school play named David. They quickly became good friends and David helped him get his first girlfriend in middle school. In early the hawks were taken down by the jets which meant that Harvey was free.

This meant that Harvey and David could join the jets but his mother disapproved of it. Since his voice could change pitches at anytime they decided to call him Mouthpiece. Mouthpiece was enjoying life with the jets until his mother died. He suffered from deep depression and what made it worse was 7 months later in August of 1956 his gang leader and close friend, Riff died. In 1957 He formed a relationship with Riffs ex-girlfriend Velma. They ended up marrying in 1966 and had a son, named Riff, twins, opposite genders, Mary and Clark, and a final son Sonny. They divorced and he kept custody of his first son and met his grandson James. His great grandkids Leslie, Carlos and Juan. He died in 2027 at 86. Although he was born in the streets he learned his good ways and became a successful Home owner. 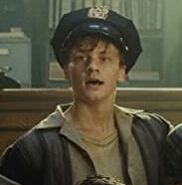 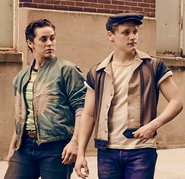 Ezra Mendas as Anybodys and Ben Cook as Mouthpiece (2021)