"We fought hard for this turf, and we ain't jus' gonna give it up!" - Riff to the Jets

Riff is a important side character in West Side Story His character is based on Mercutio from Shakespeare's Romeo & Juliet.

Riff is the co-founder and leader of the gang known as the Jets, which he started with his best friend, Tony. Riff tries to act like the realist against Tony's idealism but in reality he is rather immature with little idea of how the real world works.

Riff and Tony were friends when Riff moved out of his uncle's apartment and moved in with Tony and his family. Riff has lived with Tony for nearly five years, during which time the two formed a strong brotherly bond and eventually co-founded the Jets. Tony has since left the gang and now works for Doc (or Valentina in the 2021 movie) at his drug store, though the two remain close.

Rivalry with the Sharks[]

His hatred of Bernardo and the Sharks stems from their street culture as much as from racial prejudice; as the Jets have already defeated other gangs including the Emeralds and the Hawks. Riff is undauntedly determined to again lead the charge to protect their turf, small as it is, and upon which the Sharks are now trying to muscle in. But little does Riff (or anyone else) realize that his unwavering resolve will culminate in death- his own, and the subsequent death of his best friend Tony.

Before another brawl with the Sharks at the playground (Jets' turf), and Schrank's admonition to the Jets to stop making trouble. Riff declares that the Jets are going to settle against the Sharks with a winner-take-all rumble. Despite the protests from most of the other Jets, Riff plans to challenge Bernardo and decides to recruit Tony to stand up with him at a dance that night. Tony is disinterested but nevertheless agrees to go to the dance, where he promptly falls in love with Bernardo's sister, Maria. Bernardo is about to go after Tony when he is stopped by Riff, who wants him for a war council; they agree to meet at midnight at Doc's Drug Store.

The rest of the Jets are anxious for the war council, and after Krupke accosts them at Doc's and warns them not to be there when he gets back, Riff gets them all to focus and keep calm. With Tony's prompting, Bernardo and Riff agree to a best-man one-on-one fist fight to settle the score once and for all.

The following night, the Jets and the Sharks meet under the highway for the rumble with Bernardo for the Sharks and Ice for the Jets. Tony arrives and (with Maria's persuasion) attempts to stop it, only to be taunted by Bernardo and the Sharks. Unwilling to see Tony humiliated, Riff steps in and slugs Bernardo, and the two leaders whip out switchblades and go at it. Tony again tries to stop the fight, pulling Riff away as he is about to finally stab Bernardo in the back, but Riff breaks away and charges again, only to be stabbed in the ribs by Bernardo, and Riff falls dead. In a sudden fit of anger, Tony takes Riff's knife and avenges his death by stabbing Bernardo.

“When you're a Jet, you're a Jet all the way! from you first cigarette your last dyin' days.” - Riff

"Boy, I'm a victim of disappointment in you." - Riff to the Jets 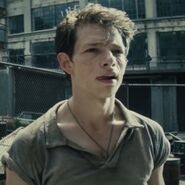 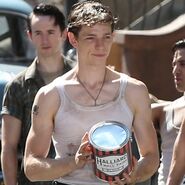