Something's Coming is a song performed by Tony in the musical West Side Story.

Tony: Could be, Who knows? There's something due any day; I will know right away, soon as it shows. It may be cannon balling down through the sky, gleam in it's eye, as bright as a rose!

Tony: Who knows? It's only just out of reach, down the block, on a beach, Under a tree. I got a feeling there's a miracle due, gonna come true, coming to me!

Tony: With a click, with a shock, phone will jingle, door will knock, open the latch! Something's coming, don't know when, but it's soon; Catch the moon, One-handed catch!

Tony: Around the corner, or whistling down the river, come on, deliver to me! Will it be? Yes it will. Maybe just by hold it still, It'll be there. 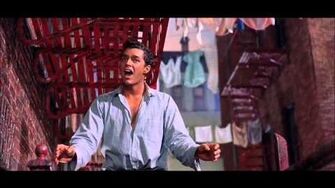