West Side Story is a 2021 film adaptation of the original 1957 musical.

It was released in theaters on December 10, 2021. Initially scheduled for release on December 18, 2020, the release was delayed a year due to the COVID-19 pandemic.

In the San Juan Hill neighborhood on the Upper West Side, a gang of white American teenagers, the Jets, fight for control of the neighborhood, defended by the Puerto Rican Sharks who are led by Bernardo. A brief skirmish is broken up by Officer Krupke and Lieutenant Schrank, who starkly remind both gangs that the territorial fight is pointless. The two officers then tell them that the whole neighborhood is being demolished for the construction of Lincoln Center but both gangs are too proud to care. The leader of the Jets, Riff, proposes a rumble between the Jets and the Sharks. He then approaches his friend Tony for help but he refuses and instead wishes to turn over a new leaf with the help of Valentina, the Puerto Rican owner of Doc’s general store. Maria, Bernardo’s sister, is betrothed to Chino but yearns for independence, against the chidings of Bernardo and his girlfriend Anita.

At a school dance, Tony and Maria spot each other and instantly fall in love. Their closeness angers Bernardo, who agrees to Riff’s terms for a rumble at the Salt Shed, so long as Tony is there. Meanwhile, Tony voices his newfound love for Maria before arriving at her fire escape, and both promise to see each other the next day. Bernardo and Anita feud over their impressions of life in America compared to Puerto Rico, with Anita buying into the American dream over the pessimistic Bernardo. The police interrogate the Jets about the rumble, but they deny any knowledge and privately mock Krupke. Tony takes Maria on a date to the Cloisters, where he reveals his stint in prison occurred after he nearly beat a rival gang member to death, which scared him into reforming himself. Maria makes Tony promise to stop the rumble, and they pledge their love for one another. Tony tries to convince Riff to call off the rumble by stealing his newly-bought gun, but the Jets steal it back.

While the Jets and Sharks prepare for the rumble, Anita waits for Bernardo to return home. Schrank then orders Krupke and the police to stop the rumble but Tony still hopes to see Maria afterward. Despite Tony’s effort, the rumble continues and Riff is stabbed to death by Bernardo. In the ensuing chaos, an enraged Tony takes Riff’s knife and kills Bernardo. The rumble is soon interrupted by the police, forcing all to flee. On his way out, Chino finds and takes Riff’s gun. Maria gushes to her coworkers about her love for Tony but her glee is short-lived when Chino arrives and reveals that he killed her brother. Even though Maria is distraught about the fact that Tony would do such a thing, she still loves him, and falsely accuses Chino of lying. Valentina learns of Bernardo’s death and reflects on her own mixed-race relationship with the late Doc. Despite the Sharks’ protests, Chino is still armed with the gun and plots to kill Tony. After identifying Bernardo's body at the morgue, Anita returns home to see Maria and argues with her about the relationship.

Accepting they are in love, she warns that the young couple needs to get out of the city and Schrank interrogates Maria about Tony’s whereabouts. He then tells her about Chino’s intentions and she sends Anita to warn Tony, who is hiding at Doc’s. However, Anita encounters the Jets, who shout racial slurs and try to rape her until Valentina intervenes. Her dream of America shattered by the night's events, a traumatized Anita spitefully claims that Chino killed Maria and Valentina condemns the Jets, who leave in shame. Upon learning of Anita’s news, an agonized Tony runs out into the streets yelling for Chino to kill him but is interrupted by Maria’s arrival much to his relief. However, Chino shoots Tony before they can reunite, thus mortally wounding him, and then he dies in Maria's arms. In her despair over his death, Maria takes Chino’s gun and aims it at the gathered rival gangs. She then threatens to kill them all for their actions but cannot bring herself to fire the gun. As the police arrive to arrest Chino, members from both gangs assemble to take Tony’s body and solemnly form a procession into Doc’s with Maria following. 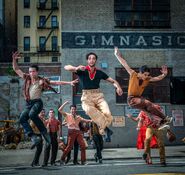